“Coming home” is the message for Vietnam’s biggest holiday

With the help of Mirum Vietnam, Pepsi’s “Tet Sum Vay” campaign celebrated the true meaning of Tet, Vietnam’s biggest and most popular holiday.

The essence of Tet is reuniting with loved ones, and Pepsi Vietnam approached Mirum to help encourage people to engage with the season.

The campaign featured activations in both digital and on the ground.

Pepsi Vietnam decided to launch a music video and a series of commercials based around Tet themes that reinforced the message of reuniting with loved ones. The main storylines of each video were about joyous moments when people reconnect after being apart. The videos were done in collaboration with and produced by BBDO Vietnam.

You can also check out campaign videos “The Middle” & “The South.”

To emphasize the messaging and make it relatable to the audience, BHD Media also produced the “Tet Sum Vay” television show. The show focused on searching for Good Samaritans and other deserving people, who were presented with free tickets on behalf of Pepsi to travel back to be with their families for Tet.

The campaign ended with a mini concert for those who were selected.

Check out more episodes of the show here.

In the spirit of the season, Mirum also launched two great Facebook activations for the Pepsi campaign: a profile picture system (or filter) and an app that allowed users to look back at their Facebook page from five years ago.

These concepts were inspired by online trends revealing that people love to revisit past memories. It became a great opportunity for the “look back five years” app, which allowed users to make a collage picture of their five previous Tet celebrations. The app achieved high interaction rates and its popularity definitely exceeded expectations.

Following this, Mirum released a second app that encouraged users to change their profile picture with a Pepsi filter. The theme of the filter was to support the family reunion spirit of Tet. Thanks to the filter profile trend, the app was tremendously popular and continued to successfully spread the message of Tet.

To support the launch of these two online activities, Mirum also created and delivered the content on a Facebook fan page to promote and continue the Tet concept. The results below clearly show the success of the strategy:

Lastly, we also had a photo contest called Lưu giữ khoanh khac, Tet tron sum vay (“Save the moment, Tet goes re-united”) as a wrap-up activity for this successful campaign. 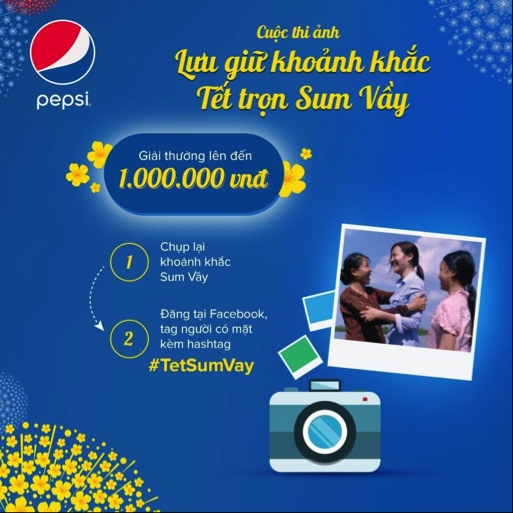 After the Tet sum vay campaign, Pepsi Vietnam helped over 5,000 students and poor workers to get a ticket to re-unite them with their family. Thanks to the inspiration generated by the Pepsi campaigns, the younger generations where inspired to help make a change to the social environment, which in turn leveraged Pepsi as a brand that is there for and supports their customers.

We are also proud of our team for the hard working and devotion to strengthen this message. This successful campaign is certainly motivation for more great ideas from Mirum Vietnam in the future.

The result was great, with 32,698 fans recruited on Facebook after the campaign.