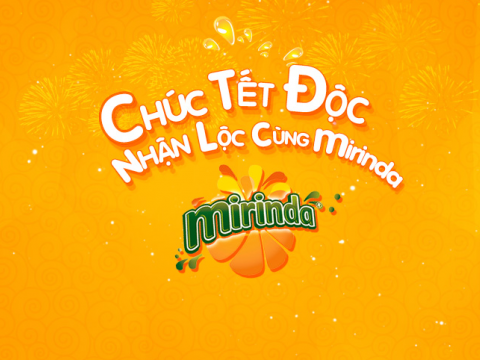 TET is the special occasion in Asian countries like Vietnam for family reunion, friend gathering, wishing. It is a competitive season in marketing when FMCG brands spread out various messages with huge paid media to connect with Vietnamese consumers emotionally.

Mirinda faced with the challenge to break through this competitive communication season, and engage its target consumers in bold fun way.

Our target audience: TEEN skews to young adult from age 15 to 25 YO. They look out for the way to break out from routine that help them standout and surprise the special ones.

Teen skew to young adult without kids from age 15 to 25. They always look out for ways to break out from routines, make their life more fun, out-standing, surprising and connecting.

90% Teen spend almost digital time on Mobile for some activities as: chatting with friend, playing game and entertaining. They always want to make something different and creative that could help them standout and surprise their beloved ones especially at Tet holiday.

TET is the most special occasion in Vietnam for family reunion, friend gathering, or wishing. It’s also a competitive season in marketing when FMCG brands spread out various messages with huge paid media.

Mirinda is a strong flavor beverage brand but still faced with the obstacle of holding stable market share especially in Tet.

TET WISHING tradition has been there for thousands of years, so finding an unique wishes, and rocking the tradition is not easy. Mirinda wanted to go with “NATIVE” in the way we advertise, so we looked for how Vietnamese youth saying wishes in digital age.

It’s the first year of the campaign, MOBILE is the center heart of the digital activation. Mirinda teamed up with Zalo, introducing: “MIRINDA COOL WISHES” Project. Vietnam’s FIRST and ONLY cool wishes library for digital age.

Mirinda called the teenager community for contributing to the 1st crowd-sourced project in Zalo. They were able to submit their own cool, funny through Zalo chat box, and the system will recognize all of them.

It’s the first time Mirinda invested almost digital budget for mobile based on the above strong media insights & habits. Mirinda called the teenager community for contributing to the project in Zalo - “Mirinda Cool Wishes”. As a result, we developed a rich library of cool wishes in the form of animated Zalo stickers, named "CHUC TET CUC VUI - FUNNY TET WISHES"

We put Zalo as the centre platform of the campaign, all media drove traffic to Zalo interactive activity.

Teens were able to submit their own cool wish ideas, something smart and funny, rather than traditional wishes. We enabled user send the wishes through Zalo chat box, the system will recognize all wishes. As a result, we developed an enormous library of cool wishes in the form of 30 UNIQUE ANIMATED ZALO STICKERS. Mirinda sticker set named "CHUC TET CUC VUI - FUNNY TET WISHES" was put on top at Zalo sticker store with featured banner also.

HOW WE ENGAGE WITH USERS
We rewarded some cute gifts for the lucky submission to encourage users,.
The interactive mobile banners were set on Zing MP3, Zing News, Bao Moi wap sites and in the apps to receive directly the cool wishes funded by users before driving them to download the coolest Tet stickers.

Mirinda Zalo page became an engagement hub for teens to share their Tet wishes and follow content from the brand. We also promoted this page by putting it on top of Zalo Hot Page and sending sticky messages. 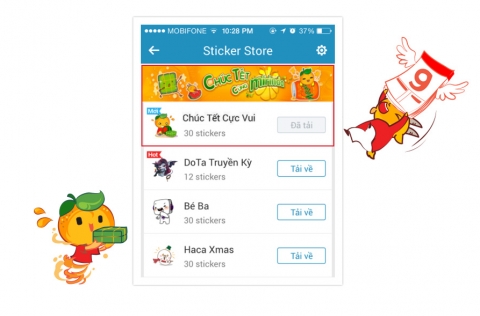 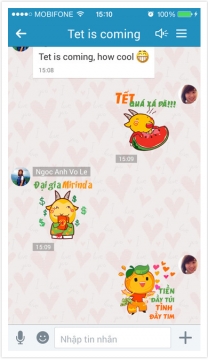 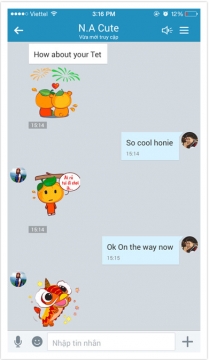 Mirinda is a strong flavor beverage brand but faced with the obstacle of holding stable market share especially in competitive Tet. To differentiate the brand from others in competitive category, the brand needed a big engagement in their target audience community.

30,000 coolest wishes were submitted within 4 weeks, exceeded KPI more than 800%
The campaign quickly hit the new RECORDS in Zalo:

During 2 months of campaign, Mirinda Zalo Page gained 21.000 fans, with averaged engagement per feed from 1,500 to 1,700. And of course, we made a funnier Tet and sold a lot of Mirinda.

The best precious Tet campaign, teen are not only explore themselves through creative activity, but also create their own Tet wishes library. They are proud to involve in the contribution and feel excited in sending the wishes to all friends and family. It’s the truly meaningful Tet, when young generation open to express their blessing emotion to everybody by the funniest way that has never been done before.