Understanding moms’ main concerns on their own kids at each stage of their parenting journey, we decided to launch an online acquisition campaign with the strategy was to acquire and convert more consumers to Friso moms via a unique and useful care packages from Friso, which are specially customized for specific needs of moms at their different stages of parenthood. The campaign kicked off in April has become the first ever online acquisition strategy to acquire consumers for Friso.

2015 has also been the tough year for IFT category with Government released the new advertising regulation, being stricter in prohibiting formula milk advertiser from communicating to kids under 2 year old, driving difficulties for Friso in achieving marketing objective in growing share through acquire and recruit new consumers.

The challenge for Friso is how to strengthen bonding to retain current consumers, yet also ensure effectively communicate to the right target audience to maximize conversion rate as well as avoid violating advertising regulation.

Friso targets at modern pregnant moms and moms with kids from 0-6 year-olds, who are independent, well educated, pursue progressive attitude towards raising their children.

They are hyper connected and proactively search for relevant information for babies’ health and development at different stage of parenthood.

They are highly active not only on computer but also on mobile with mobile penetration is extremely high, reaching 97% with 43% of smartphone ownership.

With the fact that 60% of the total search queries are being generated from Mobile and 47% of the audiences are accessing FB only through mobile, we activated an online acquisition campaign with core medium as Mobile to acquire, recruit and convert consumers to Friso users.

The advance technique of segmenting the consumers like Look-a-like modelling & re-targeting was used to identify the target consumers , then buckets them into the respective consumer sets like (1) pregnant women (2) Mother with kids 2-3 years old.

The landing page has been designed as mobile friendly to capture the data and allow to filter the right audience straight away by giving them options to select the options from the above mentioned three audience set so that they can enter the right landing page and fill their details for Friso customer representative to get back to them and engage further to deliver offers and convert to Friso users.

We did create always on mSearch to tap on to all the pre-qualified consumers, redirecting them to the relevant landing pages to enable them to fill their details. We created always on Social campaign on FB with 60% reach, with absolutely right targeting consumers to entice them to fill the details with right messaging.

On Display across the top mobile heavy website, we served very specific call to action banner for the different target consumers to drive only filtered consumers to the website. 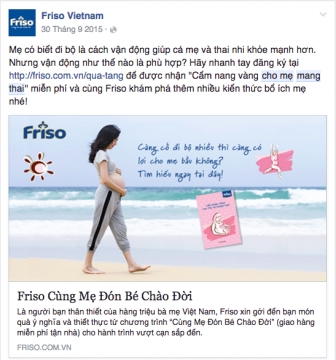 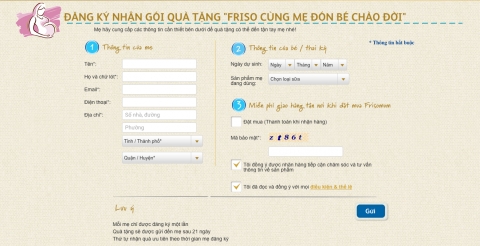 YTD Q2 15 milk category grow 64% vs. Q1’14 while total industry increased only 6%. Segment has been heated up since early 2015 and become highly competitive with most competitors boost up weekly airing weight (average increase of 30% on weekly weight).

The online lead generation campaign has contributed to the increment of Friso market share from 9 pts to 10 pts in four months.

With this pilot campaign on online lead generation that was started in April, it has now become an always approach and has become the key medium in helping Friso to acquire more consumers and strengthen brand's share.